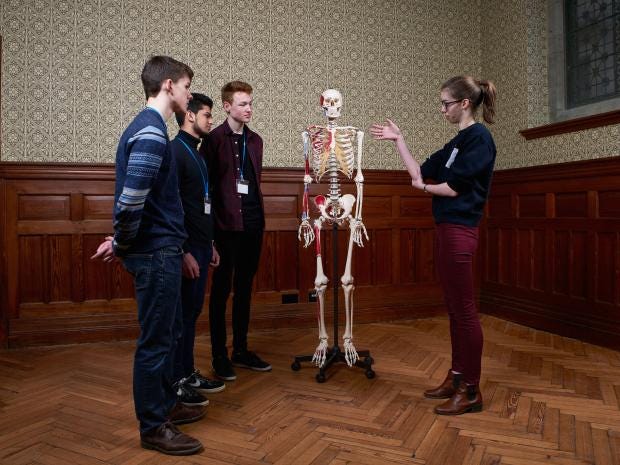 One of Cambridge University’s oldest colleges has launched a scheme to encourage sixth-formers from state schools to apply to study medicine by letting them experience undergraduate life.
The project was the brainchild of two medical students at Gonville and Caius College who were concerned at the difficulties facing state school pupils who might find it harder to break into the profession. They wanted to give practical advice and show them that Cambridge students were “not all posh boys in red trousers”.
Medicine is highly competitive and requires medical work experience. Courses often end up dominated by students who attended private schools or whose parents or family friends are doctors.

Luke Bibby, 21, president of the college’s medical society, knows the difficulties facing applicants with no medical links. He is the first member of his family to go to university; his father is a plasterer and his mother an administrator. Unable to get work experience in a hospital, he ended up volunteering in a care home and shadowing a physiotherapist. He said: “I came from a state school and I know how important access schemes are. I thought it would be great to show sixth-formers what it is really like to study medicine at Cambridge.

“When I was in year 12, Gonville and Caius ran an access scheme in the Easter holidays across all subjects. It made me realise that it would be achievable for me to study medicine at Cambridge and from then on I just concentrated on getting the grades. I want these students to see how down to earth everyone is.”
Ellie Walder, 20, the medical society access officer, said: “It is much easier to get work experience if you have a close relative or family friend who is in the medical profession. I wanted to show state school students who don’t come from medical families how to maximise their chances of getting in and to advise them about how to get work experience if you don’t have any contacts.
“A lot of students told me that before they came they felt that they wouldn’t fit in, but now, having been here, they felt that they would apply.”
Under the Gonville and Caius scheme – the first of its kind for any subject at Cambridge – 20 sixth-formers spent time at the college over three days. Undergraduates gave up their bedrooms and shared with friends to enable the pupils to stay in a student room and get a taste of life in college. They took part in sports and went to lectures and supervisions. Each was assigned a student to shadow, who looked after them.
Michael Turnbull-King, 17, from Tring School, a comprehensive in Hertfordshire, said: “It has been really good to attend real lectures and supervisions. I had no idea what they entailed. It has been really useful to experience what it would be like … because it’s very different to school. It’s also made me realise that as long as I can get the grades I have as good a chance as anyone to get in.”
Research by the Sutton Trust shows that of Britain’s top doctors, 61 per cent were educated privately, nearly a quarter at grammar schools (22 per cent) and only 16 per cent at comprehensives.