UCL rent strike: University official tells students it is a 'fact of life' some people can't afford to study in London 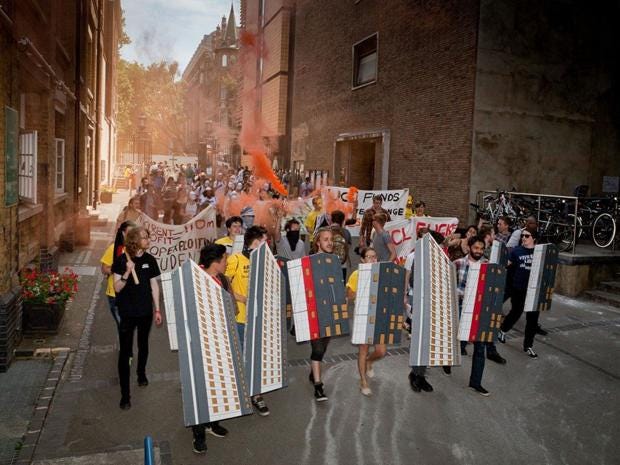 The rent strike dispute at University College London has worsened after a senior official told students it was a “fact of life” that some people can’t afford to study in London.
Hundreds of students are at risk of eviction after pledging to join an indefinite rent strike declared last month. The group, who are tenants at UCL’s Ramsey Hall and Max Rayne House residences, are said to be withholding a total of more than £1m in protest against “soaring” accommodation fees.
In a meeting between UCL representatives and Cut the Rent, the campaign group behind the protest, management officials said they were not prepared to meet the group’s demands to cut rent prices by 40 per cent.

UCL Director of Estates, Andrew Grainger, was taped telling students:  “We do not set out rents on the basis of the least well-off students… Some people just simply cannot afford to study in London and that is just a fact of life.”
The director’s comments at the meeting last month have enraged the protesters, a number of whom have already received written warnings about their continued payments.
“it wasn’t a ‘fact of life’ seven years ago,” said Sarah Benamar, who lives at Max Rayne House. “I don’t believe facts of life are subject to change. UCL has made this situation a reality, and it is definitely within their power to unmake it now. That is what we are asking for.”
At the meeting Mr Grainger confirmed that UCL management “will pursue evictions” against students participating in the rent strike, describing the process as “a last resort”.

He said: “If people withhold their rent, which is a very clear, decisive action on the student’s’ part, then ultimately, UCL will have to take action and there will be consequences as a result.”
Cut the Rent campaigners estimate that UCL accommodation prices have risen by 56 per cent since 2009 and are set to rise again next year.  Rooms in the university’s three Halls of Residence range between £143.50 and £270.06 per week, making them some of the most expensive student digs in the country. A small number of shared rooms are available for less.
“UCL runs its accommodation with a 45 per cent profit margin over £15,779,000 yet shows flagrant disregard for socially accessible education,” the group said. “This can only accurately be described as a social cleansing of the University.”
Around 150 students have been withholding rent since the strike began, with a further 500 signing an agreement to refuse the payments requested for next term’s fees.
As well as calling for reduced rent, students are campaigning for greater transparency in the way their fees are spent, accusing UCL of exploiting its residents for profit to fund the university’s vast expansion plan.
Campaign organiser Angus O’Brien confirmed that UCL management have “started procedures” to evict student strikers, and said the group would “continue to oppose” the university’s response.
UCL spokesman Dominique Fourniol disputed claims that the university makes a profit from tenants, but confirmed that income from accommodation services was being used to fund planned new residences.
He added: “We fully appreciate that affordability in London is an issue, and we do everything we can to keep rents affordable. This is a challenge not just for UCL but all universities in central London. We do not make any profit on rent. We are a not for profit organisation, and any surplus each year on rent is ploughed back into residences.”
Alfie Duffen, a student participating in the rent strike said: “The cost of accommodation should not affect a student’s ability to come to UCL. We will continue striking until UCL has made this a reality, not a pretence”.