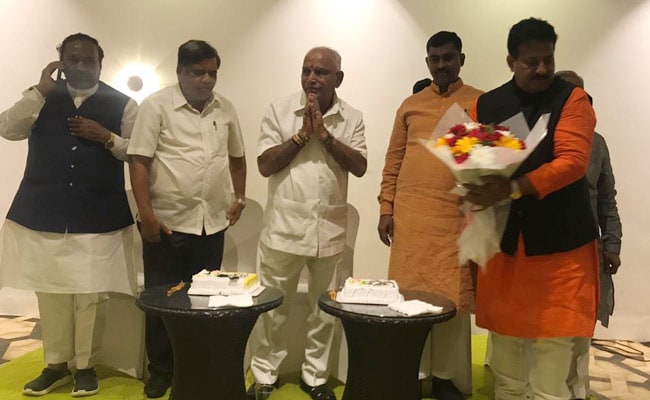 If he gets the top job, BS Yeddyurappa will be sworn in for the fourth time.

The BJP’s BS Yeddyurappa, tipped to be the next Karnataka Chief Minister after the fall of the 14-month-old HD Kumaraswamy-led coalition government last evening, may stake claim to power only after the approval of the party’s leadership in Delhi.

Party leaders say Karnataka BJP lawmakers will elect Mr Yeddyurappa as their leader as a formal step towards his appointment as chief minister.

Reports suggest that Mr Yeddyurappa may fly to Delhi for discussions with Home Minister Amit Shah, the BJP president, and the party’s working president JP Nadda.

“We will have the legislative party meeting today and will wait for the directions from the parliamentary board. It might have come… Next we will stake claim to form the government,” Karnataka BJP leader CT Ravi said.

If he gets the top job, Mr Yeddyurappa will be sworn in for the fourth time. He has never completed a term in office and his last stint was in May last year, when he quit after just 48 hours because he couldn’t raise a majority.

The BJP is confident of its numbers. On Tuesday, the party won 105 votes to the Congress-Janata Dal Secular’s 99. The coalition lost 15 lawmakers who resigned over the last two weeks and are mainly stationed at a luxury hotel in Mumbai.

The effective strength of the 225-member Karnataka assembly is 210, with the half-way mark at 105.

“With 107 members, including the support of two Independents, our party will be in a position to win the floor test to prove majority in the House,” added said Karnataka BJP spokesperson G Madhusudan.

The BJP is also expecting lone Bahujan Samaj Party (BSP) member N Mahesh to extend his support as he has been expelled by his party chief Mayawati for defying her orders to support the ruling coalition and abstaining.

But the rebels who led to the downfall of the Congress-JDS government have said they may not return to Bengaluru just yet.

“There are no immediate plans to return to Bengaluru. We will stay here for some more time,” dissident JDS legislator AH Vishwanath told the Press Trust of India. He refused to comment on whether the disgruntled legislators were waiting for the BJP to come to power.

The rebels had been summoned by Speaker KR Ramesh Kumar yesterday, but they wrote to him asking for four more weeks to meet him.

Soon after losing the trust vote, senior Congress leader Siddaramaiah tweeted that those who have fallen for ”Operation Kamala” will never be taken back. “Operation Kamala” – based on the BJP’s symbol lotus — is used by the Congress to describe what it alleges is the BJP’s campaign to seize power by using money and other inducements to lure away lawmakers.

CTET 2019 December Exam Over; What’s Next

NEET: Candidates In Cultural/ Customary Dress To Be Allowed To Take Exam